Peter Pan of the Toboggan Hill

My family (that is my father, my brother, and I -- my mother stayed home and warm doing whatever early 1960s mothers did) were keen tobogganers. Any hill in a storm would do, although our hills of choice in Toronto were those of High Park. I haven't been back to High Park in years, but I remember a drive and then parking near the Grenadier restaurant followed by a trudge deep into the center to a little sheltered valley surrounded by snowy almost treeless slopes. Beyond the yelps and screams and swoosh of wood on snow, the sounds of the city were barely audible. This was an iconic Canadian experience -- stinky wet wool, cold feet, red cheeks, hugging your father tight as you rode shotgun into white.

My father's rules were short and simple -- no overhanging arms or legs (unless you wanted to create drag or break), no bailing, screaming was mandatory. And the toboggan - Canadian made of course. I don't remember the brand, but I suspect that it was purchased new from Canadian Tire (I have a vague recollection of one under the Christmas tree). It would have been made of ash -- first blonde, then aging to a mellow amber, and the cushion was red plaid canvas that did little to cushion the bumps and thumps as we slid across rock and branch and ice chunks. My father was maniacal about waxing. The evening before an outing he would disappear to the basement and in the glow of his workshop light, apply ski wax from an assortment of tins, colored to indicate the snow conditions that would challenge us.

Our family tobogganing history came to an abrupt end, the winter of 1968 -- on New Years Day to be exact. All conditions aligned towards the outcome of that day. We tried a new hill -- an Everest-like slope overlooking the Humber Sewage Treatment plant. The snow was hard packed tending towards ice, which worsened as the day progressed and the hill was made slick by repeated runs. And at the base of the hill -- a mound of snow cleared from the parking lot and deposited by the plow. On the last descent of the day, my brother, despite my father's new rule -- only go half way up -- insisted we summit. Little sister that I was, and not wanting to appear to be a sissy, I followed. In memory, I can see it unfold. The push-off,  the initial jolt of fear as we gathered speed, attempting to break, losing grip of my brother's parka, and then bailing and watching from my position half way down the hill as my brother continued to plummet, hit the snowbank at the bottom and then launch into the air. All adult heads turned as motion slowed and he seemed suspended there, Peter Pan of the toboggan hill, a blue blotch of snow suit against the steely grey city sky, not yet descending.

My brother and our family survived the day, the bump on the head, the drama of a hospital stay, but we never tobogganed again. Mother's order was given with an unmovable resolve and it struck fear in our hearts.

Some 40 plus years later, I broke the rule by tobogganing once more. That childhood prohibition must have been powerful, because the whole experience felt a little bit dangerous and illicit.  My ride wasn't on a wooden toboggan -- it was a fast, plastic sheet and the snowy hill was in Ottawa. But the sounds and the view and feeling were the same. Children in red mittens and toques and swishing apparel, fathers acting like kids, and me holding on tight to the man in my life, tucking my limbs and letting out at the top of my lungs, the obligatory, joyous, yelp and squeal.

As for Canadian made toboggans -- there are still some wonderful manufacturers and suppliers. I don't have small children or go tobogganing frequently enough to justify the expense and the storage, but in my imagination, one sits in my basement, waiting to be waxed, waiting for the perfect snow day, waiting to run on some perfect hill.

A History of the Canadian Toboggan

A very cool company featuring great items for outdoor adventures, many of which are made in Canada -- including toboggans. They also promote a philosophy of fair labour practices and nature conservancy.

National Post journalist Nathalie Atkinson has written a number of articles on ethical clothing shopping and the difficulty of identifying 'Made in Canada' products. The articles are eloquent and thoughtful and clearly outline the role we play as individual consumers in the fashion supply chain. A good read before you head out to buy your winter supply of socks and long underwear. In the meantime, also check out Stanfield's - The 'Underwear Company'. Most of their products are made in Canada -- Since 1856. 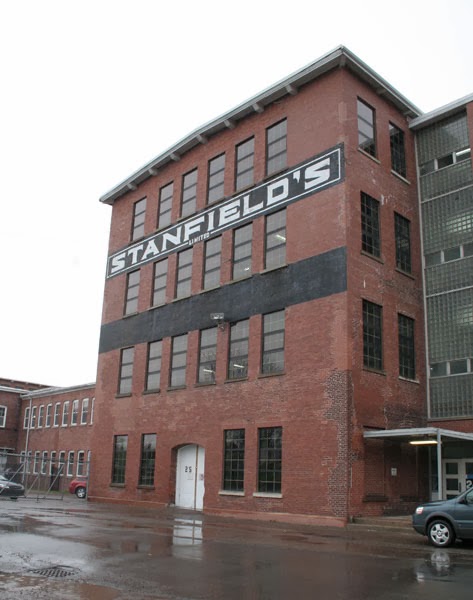 Too Cold To Ride

As I said, it's cold in Ottawa. Minus 38 c with the wind chill. It's too cold to do much of anything. For me and my little horse Panda it's too cold to ride. But let me introduce you to Panda. Panda is not a thing, but she is Canadian, made in Canada. She is a breed called Cheval Canadien, Canadian horse, the little Iron horse, the official National horse of Canada.  Panda is the culmination of over 300 years of dedicated breeding by the hardy farmers, primarily from Quebec who raised these sturdy animals to plow their fields, pull their wagons, safely transport their children to church, to school. It is a quintessentially Canadian breed -- sturdy, curious, alert, inventive, sound in mind and body, sometimes opinionated, adapted to rough conditions and cold, cold weather, exquisitely beautifully and a bit untamed. What a perfect animal to represent this country of ours.  In winter, Panda's coat is blue black and as thick as a mink's. I love burying my hands in her mane to warm them. I love watching her dash around her paddock kicking up a whirlwind of snow. I can almost hear the sleigh bells. I wonder if she dreams of spring. 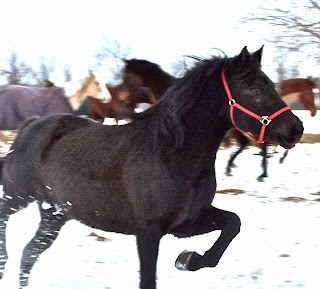 I need a bag. I would like it to be waxed and grey and sturdy -- so it doesn't show the salt and slush of Ottawa streets in January. I found it -- designed and made in Toronto by a husband and wife team (John Booth and Arounna Khounnoraj of Bookhou). It appears to be a lovely grey-blue -- the color of storm clouds. I'm ordering as soon as I finish this blog entry. They make other things -- furniture, ceramics, and textiles. The ceramics in particular speak of forests in winter, black elemental figures in snowy fields, Canadian cold. How cold? -- it is -27 c in our Capital city tonight. 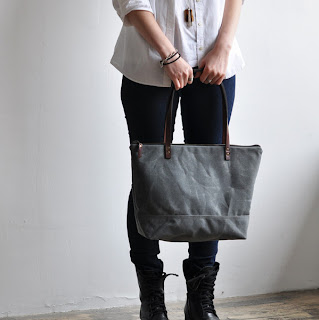 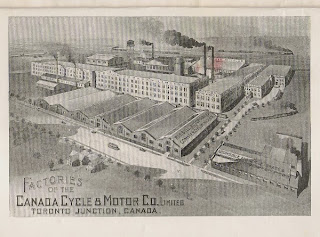 When I was a little girl, growing up in the city of Toronto and in Thornbury, Ontario on the shores of Georgian Bay, the world in which I lived was populated with the names and brands of goods made in Canada -- a Sunbeam toaster on the kitchen counter, Mitchell's Apple Juice in the refrigerator, my best Sunday winter coat with the rabbit collar from Montreal. All these things made by the hands and through the labour of my family, my neighbours, locally, and in all corners of the northern country which I inhabited.  On the wages we earned from the things we made, we bought homes, we educated our children, we put food on the table, we bought skates and bicycles (made in Canada) on which we sped across the blue ice of our lakes and the gravel roads of our countrysides.

I am not sure when or why it all changed, why we basically stopped making things.  I am not a historian or an economist. But at some point, it seems, our demand for more and cheaper 'stuff' to fill the closets of our ever expanding homes and industry's drive to produce greater and greater profits came together in a perfect storm that has devastated our country both economically and psychologically.  This is not just a Canadian tragedy of course, but I think we might feel it more keenly, because we are a nation that has always struggled with identity, and one of the most important ways we build identity as a nation is through the things we design and build.

And so this gets me to the purpose of this blog -- to celebrate things Canadian made and the people that make them.  This isn't a blog focused on stuff and buying things, but rather I want to explore what these things represent and the stories behind them - Canadian stories. I'll also throw in some remarks about politics, music, and Canadian culture just to shake things up a bit. This is, of course, a personal blog, so I want to highlight things that I love and appeal to my taste and my style, and people whose ethics and purpose align with my idea of what is inherently good and fine and true and reflective of what Canada is and what Canada has the potential to be.

Email ThisBlogThis!Share to TwitterShare to FacebookShare to Pinterest
Labels: canadian made, made in canada, manufactured in canada
Location: Ottawa, ON, Canada
Home
Subscribe to: Posts (Atom)